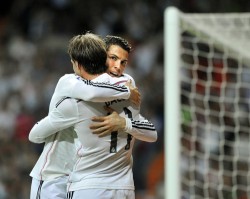 We’ve seen big data and cloud technology put to many different uses by different businesses, namely the financial sector, but the entertainment industry has wised up to the benefits of large data sets as too has the world of sports.

Spanish soccer team Real Madrid, the world’s most valuable sports team at $3.4bn, has been somewhat lagging behind in truly embracing technology despite its massive check books. The team, which includes soccer all-stars like Cristiano Ronaldo and James Rodriguez, has now turned to Microsoft to aid its efforts to transform its business and how it interacts with the fans that make it possible.

“Real Madrid is a club with a great tradition of winning, and our partnership with Microsoft for digital transformation will help us win both on and off the field,” Real Madrid CEO José Ángel Sánchez told Microsoft’s Ignite conference recently in Chicago.

Being such a powerful global brand with so many fans can be a challenge says Sánchez. “The Microsoft cloud and its entire product portfolio is helping us change into a truly data-driven organization and to provide 450 million fans around the globe with exclusive, personalized content and services — before, during and after matches,” he said, standing next to Microsoft CEO Satya Nadella, who was revealing a spate of new products and services.

Using Azure, Real Madrid will open up a new platform for fans to engage with news and facts about their favorite soccer club. It may come as a surprise but despite being a Spanish club, only about five percent of its supporters are in Spain.

The US and Indonesia each have more supporters of Real Madrid than Spain. These two countries represent two very different fan bases and passions for soccer, which means that any tech that Microsoft could offer needed to be diverse and engaging with two-way communication.

Real Madrid is also using the Azure service to deliver an extensive video platform for fans including new fresh content and archive footage, such as old soccer matches and highlights, to attract fans old and new. Azure Media Player displays and runs the video content to the user while Azure Search powers all of the user’s search queries.

The platforms will launch on May 19. They will represent a new frontier in business to customer (B2C) communication. More and more brands, whether sports teams or entertainment companies, are seeking fresh ways to engage with fans on a personal level. Tools like social media have been invaluable but developing multimedia platforms with huge libraries of content is proving a powerful and the data from users that provide can be like gold – if used correctly.

Real Madrid says that it will collect data on age, location, and gender of its users. The location data may be show to be the strongest though, especially when targeting specific fans in different areas of the world.

Microsoft isn’t just helping Real Madrid engage more with fans but also providing its technology for use on the pitch for players. We’ve seen technology permeate the sports arena in a number of different ways in recent years like goal line video technology and wearable technology.

“We think that [data analytics] is going to play a role in future team performance,” Sánchez told Quartz. “We are just starting, but it is a really a very interesting area, and it could be a certain area of advantage in the future.”

US soccer team The Seattle Sounders have used technology and data analytics in a similar way to track players’ performance and Real Madrid will hope to do something similar.

Using wearable trackers, players and coaches can analyse how players are improving and what their weak spots are. The waves of data produced could even be used to predict potential injuries and weaknesses in their game and ultimately protect the players.

As the world’s richest soccer team ($3.26 Billion) with a lot of money worth of players on the pitch, the most efficient training is vital for Real Madrid. Exactly how Real Madrid will use Microsoft’s data analysis tech in this regard remains unclear. For now, we’ve only heard about the club’s intentions for fan engagement in detail.

“We aren’t a software company, but in the end we admit that these technologies from Microsoft are really helping us transform the club. That is true,” says Sánchez. It represents Microsoft diversifying its client base under the leadership of Nadella. Could more partnerships and deals like this emerge in the near future?

We’re already seeing smaller teams deploy big data analytics, such as NCAA basketball teams using player tracking technologies meanwhile massive sportswear companies like Adidas are branching out into their own tech hardware like its wearable miCoach. Who knows what the future holds for the intersection of technology and sport.