During the first few years of the 21st Century, the business rule book has been torn up and rewritten by startups which barely existed 15 years ago. Consider that companies like Facebook, Google, Salesforce, Twitter, Groupon, and even Apple to an extent (Pre ibook/pod/pad/phone era) were all startups or even non-existent at the turn of the century. Together, these modern giants now contribute nearly $1 trillion dollars to the annual US GDP.

The era of the startup is firmly upon us and one of the critical features of any startup is a sophisticated, nurturing ecosystem which allows the company to grow and expand into a global player. A new study by Compass, entitled the Global Startup Ecosystem Report raises some very interesting points about where growth is happening and how to expand it even further. “There has never been a better time to be a tech entrepreneur, as entrepreneurs are now blessed with the tools, resources, and market conditions to scale a company to billion dollar ‘Unicorn’ status faster than ever before,” according to the report. 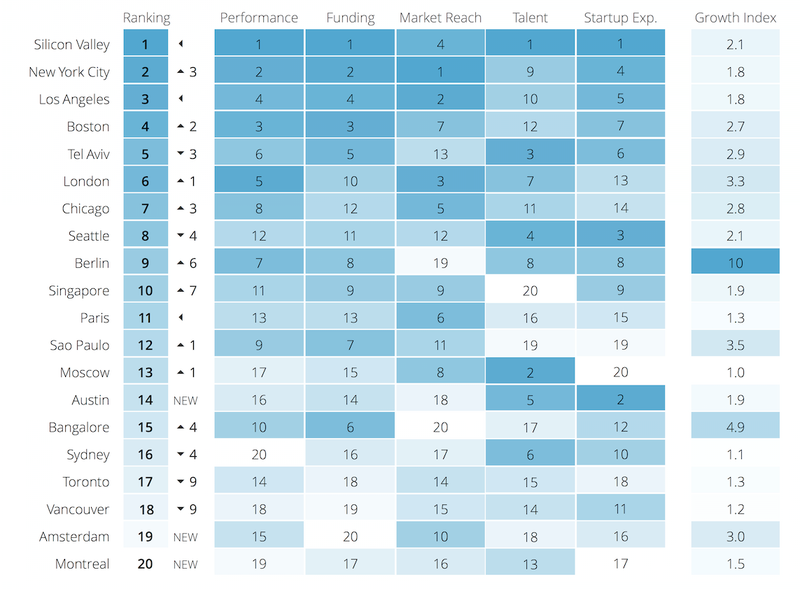 The United States still dominates globally, with 6 of the top 10 startup ecosystems, yet increasingly the startup ecosystem is a global phenomenon with governments around the world learning how to facilitate environments for this emerging work culture. Silicon Valley retains the top spot, followed by New York and then Los Angeles. Outside of the US, the cities of Tel Aviv, London and Berlin are the best places for startups to emerge and be nurtured.

The rise of startup ecosystems is unlikely to slow any time soon. “Information Era businesses have become the dominant source of economic growth, significantly automating or altering much of the industrial and service businesses of the previous economic era.”

Growth hacking is a key endeavor of all startups, which is defined by Wikipedia as “creativity, analytical thinking, and social metrics to sell products and gain exposure”. The report discovered a number of key insights when developing the report about successful ecosystems and their ability to fast-track growth.

Primarily, startup ecosystems have become much more interconnected and international, both in staff and investors. One third of all ecosystems have at least one funder from abroad and at the same time, one third of employees in a startup is foreign to the country where the startup is located.

The report states that “The ecosystems with the most growth in VC investments were Bangalore (4x), Boston (3.7x), Amsterdam (2x), and Seattle (2x). Almost all of the increase in Silicon Valley funding was in late stage Series B and Series C+ capital rather than early stage capital” which talks to the maturity of the Silicon Valley market.

Interestingly, it seems that being part of an ecosystem is more important than ever. More and more companies that start outside of an ecosystem seem to move into it in order to fuel further growth. Between 2012 and 2014, the number of startups moving into an established system multiplied by 8 times. “Overall, the trend for female entrepreneurs is significantly up—the number of female founders in the global startup ecosystem has grown by 80% over the last three years.” The number is still small but its growing fast and the glass ceiling for female employees appears to be cracking.

Ultimately, the report places a lot of faith in technology startups as the hope for humanity in the 21st Century, claiming that “they are the primary growth engine of the Information Era and nurturing startup ecosystems can keep the world on a path to greater prosperity.”