Should Businesses Fear the Power of Amazon and Google?

Amazon is replacing Google as the most cited company, according to the number of mentions in publicly available corporate conference calls. The news passed largely unnoticed although this is quite a news bearing in mind that both the companies are major contenders in the battle for connected homes, Internet of Things, and Artificial Intelligence (AI) adoption. 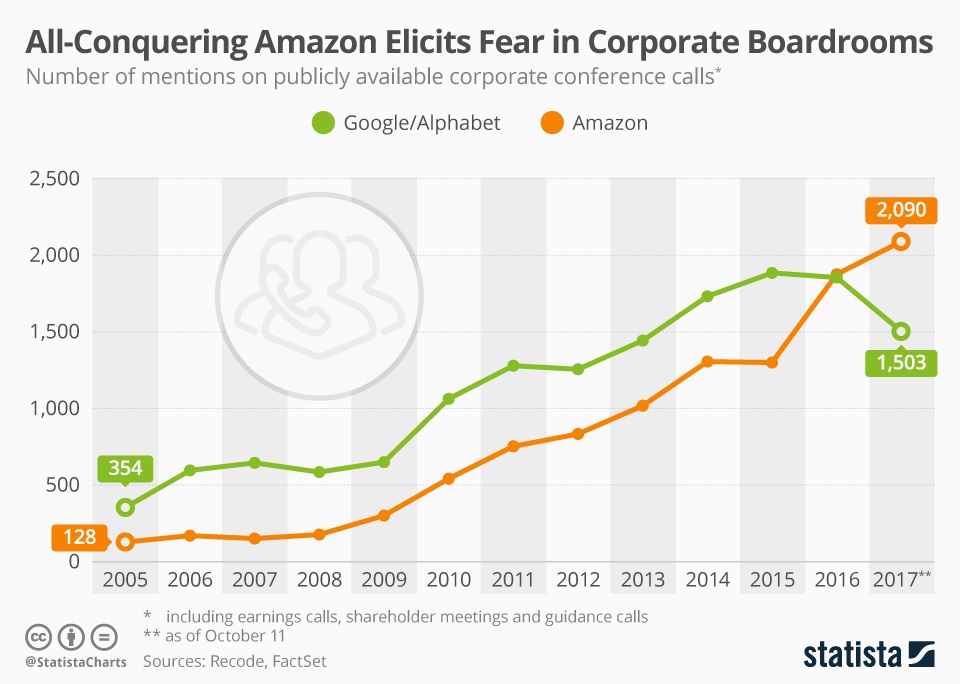 Amazon: Behind the Figures

Data collected by FactSet data and analysed by Recode shows that Amazon is the most feared company among businesses judging by mentions in earning calls, shareholder meetings minutes, and guidance calls. During the first three quarters of 2017, some 2,100 corporate conference call make mentions of Amazon with about 1,500 mentioning Google. Why is that?

Amazon leads the way in fields such as online retail sales and cloud infrastructure. They make every effort to dominate the market of smart home assistants and have invested in brick-and-mortar grocery chains. They develop drones and AI-enabled devices intended to dominate the future market for drone deliveries and connected IoT homes.

What started as a digital marketplace is now an online empire worth billions of dollars and trying to enter virtually any industry vertical – from hardware to food delivery to video distribution. With $150 billion in annual sales, they are a force to reckon with although they trail in a very important market segment – search engines and advertising.

Google: Behind the Figures

Google now manufacture hardware and develop AI-powered systems, trying to convince consumers they are evolving as an AI company. Their primary business, however, is online search and online advertising. They act as gatekeeper for any business planning to hit the market by storm and a minor change in their search algorithms can wipe out thousands of businesses from the first pages of Google search results. Which means a lot of fresh income in new ads, you know.

Without doubt, they invest a lot in new technologies such as AI, Machine Learning, and natural language understanding. They compete on equal terms with Amazon in the provision of cloud infrastructure services and recently won a large cloud client such as Snapchat. They also invest in self-driving cars where Amazon will compete with them through drones and probably autonomous trucks.

Amazon and Google: Fear Both

Although Amazon appears in more publicly available corporate records recently, businesses should fear both. As said above, both companies are trying to dominate huge and crucial industry segments. Those include cloud infrastructure, online retail sales, and online searches. You should add smart home devices to complete the picture.

Ability to track consumer online searches, purchases, shopping habits, and smart home assistant usage is critical in today’s business environment. Both Amazon and Google are capable of doing that. Businesses are more worried by Amazon right now because Amazon have entered a huge market such as the brick-and-mortar retail sales and plan to revolutionise retail deliveries and online purchases through connected home devices. Google are set to give them a run for their money through their own home assistant for which a researcher just recently found it is tracking communications at will.

Businesses should actually not fear Amazon and Google but find ways to prosper and progress by taking advantage from valuable services they can offer at this very moment. They are no different from any monopoly on Earth despite the entire PR buzz surrounding one or another of their research efforts. The IT sector is not immune to creation of monopolies while the world history teaches us that no monopoly lasts forever.