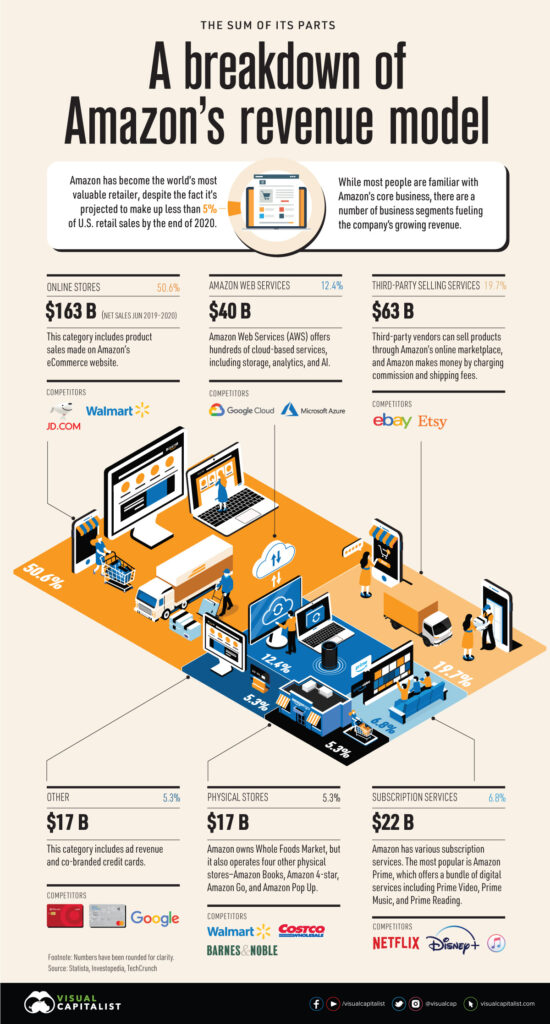 Amazon has become the largest retailer worldwide, however it is projected to make up less than 5% of U.S. retail sales by the end of 2020. While most people are already familiar with Amazon’s core business, there are a number of segments that contribute to fueling the company’s growing revenue. (Infographic provided by Virtual Capitalist)

Statistics of net sales for Jun 2019-2020 reveal that the business segment of online stores accounts for the maximum revenue that is about $162 billion or 50.6% of the total revenue.

In the other segment where Amazon charges third-party vendors for selling their products, Amazon has generated $63 billion that is roughly 19.7% of the total revenue. In this category, eBay and ETSY are the main competitors of it.

With their third business segment, Amazon Web Services (AWS) offers several cloud-based services and this department accounted for 12.4% of the total revenue. Amazon has Google Cloud and Microsoft Azure as its primary competitors in this department. Looking further into the breakdown of total revenue, it is reported that Amazon has generated about $17bn through ads and co-branded credit cards. This category has found Google as its primary competitor.