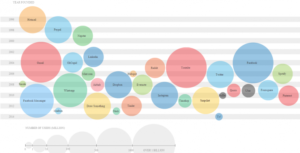 How Social Media is Changing Fintech and Other Startups

In the last 10 years, social media has utterly exploded. Today, every business, startup, or corporation is almost guaranteed to be active on some form of social media. Whether it is Twitter, Facebook, Snapchat, Instagram, social media has become a massive part of business and is help to revolutionize Fintech and the business world at large.

The rise of smartphone use, especially amongst Millennials, has driven Fintech startups to herald in a new era of financial services. But all businesses have been getting involved in one way or another. There have been suggestions that banking is having it’s “social media moment” – and with online and mobile financial services becoming more and more prevalent, it is hard to argue with that claim.

Social media has transformed the way banks and other businesses interact with customers; social media data can be used to help people get a loan or credit, or open a bank account. Customer service has also undergone a massive transformation thanks to social media. For example, in September 2014, Econsultancy compared the response rates of 16 banks on social media in the UK, with the quickest response coming in at just three minutes, and the longest at one hour and twenty-four minutes. Social media has allowed large volumes of customers to voice grievances through these new channels, and thus feel more connected to the business that they are dealing with.

Even more established companies have had to turn from solely traditional marketing techniques – American Express has given the opportunity for customers to link their Facebook or Foursquare accounts with their Amex card, and then offering deals based on data drawn from these accounts. American Express even won awards for this intuitive and innovative technique!

Data isn’t the only way to utilize social media for marketing, Instagram in particular has become incredibly popular for Travel-tech start-ups and Online Travel Agencies. Instagram has been a game changer, with 500 million users it is giving these sorts of businesses the opportunity to captivate users with incredible photographs – in this case of the fantastic destinations that are available round the world. For example, Justfly, an Online Travel Agency run by Matt Keezer and Momentum Ventures, has a particularly engaging Instagram feed, and will often offer deals on the destinations that they display! In this case, pictures speak louder than words, and this has not gone unnoticed by Instagram. They have just unveiled new business tools geared toward business owners, so clearly social media is more than happy to embrace its new role in marketing and business.

Social media is also being used by some banks to design and deliver revolutionary new products. For example, in Turkey, DenizBank turned traditional banking on its head but offering banking services through Facebook. Customers have the option to connect their Facebook and bank accounts, they can then use the service to initiate money transfers and monitor spending.

Social media has completely redefined the entire business landscape. It has changed marketing techniques, customer service, and even fostered the creation of new integrated ways of handling money and doing business. If this current trend continues into the future, we could soon see the majority of our daily lives and dealings taking place online via social media.