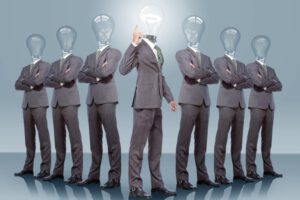 How Close Are We Getting To An Internet Hive Mind?

The idea of a hive mind has been around for quite a long time in science fiction. It’s also been one that has been thrown around to describe the internet or at least certain communities on the internet. Until 2021 I do not think we had a better example of this concept in the real world than the one I am going to describe here. But let’s begin with what a hive mind is.

The best example I can use to help understand the concept of a hive mind is through the TV show Rick and Morty. In season 2, Rick and Morty encounter a planet that has been taken over by a hive mind called Unity – who Rick used to date. Unity absorbs people into the hive mind one-by-one, passing her consciousness between all the people on the planet with the ultimate goal to assimilate and become the universe. Each individual moves and speaks autonomously but they are all at once one brain and one entity. Unity can speak through any one of these bodies and she has total control of each (until she gets a little drunk and loses some control of some of the planet). She/they think and act as one consciousness, despite seeming like many separate people and entities.

So you may be asking why am I talking about a sci-fi cartoon? It’s because this concept has been thrown around as a potential for the future of the internet. The internet is the world wide web of connections spanning the globe and bouncing off satellites in orbit around our pale blue dot. The internet in itself could already be considered a hive mind or some kind of artificial intelligence, but it is not coherently focused on one goal nor does it have a common knowledge or belief in the same way that a hive mind works in science fiction.

So if not the internet as a whole then what could represent a hive mind in our current era? A hive mind in 2021 is one that may think and move as one and that is greater than the sum of its parts. It most likely takes the form of some online community, where each individual can contribute to the consciousness and knowledge of the hive-mind regardless of location or background.

It is my belief that with the rise of the retail investor and the GameStop Saga that Reddit has birthed forth the first hive mind of its kind. To give you the short version of this story, in January a group of individual traders spotted the opportunity to call the bluff of a huge bet that a few Hedge Funds were making – that the company GameStop would go bankrupt. They began buying up the stock in huge quantities and inviting as many people into their community on Reddit as they could find.

The community was filled with highly educated traders and lengthy and in-depth analysis, helping to educate the new recruits. They even built their own algorithm to analyze users post history and determine whether they were a legitimate user or someone being paid to post and disrupt the community (allegedly). From February onward the “Apes”, as they called themselves, educated themselves and delved deeper and deeper into the world of finance, dark pools, and naked short selling. They recruited world-leading experts like Dave Lauer, Wes Christian, Dr Susanne Trimbath, Carl Hagberg, and Lucy Komisar to help analyze and understand what was happening, hosting live streams and getting the community to put forward questions and having them analyse their DD. Despite all this work, there are questions remaining.

Has this community become the purest expression of Reddit and the internet hive mind that we’ve seen to date? Have they spotted the fatal flaws in the financial system and found a way to punish the recklessness and greed of Wall Street? Or are they just a bunch of idiots on the internet? I can’t wait to find out.

In the future, we may see groups like this physically linked by neuralink or some other form of brain-machine interface technology, but there is a long way to go until then. What is exciting is watching the internet evolve and potentially become the kind of hive mind that even the most optimistic tech utopians would not have predicted to be possible this soon in humanity’s development.