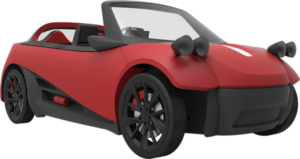 Designed by Portland-based artist, Kevin Lo, the LM3D Swim has a beach buggy design that emanates a fun and playful aesthetic. It has a bright red color, and features outward-facing speakers at the sides, although Local Motors decided to omit them for fear of disturbing the crowd. Suppose you don’t like the beach buggy design, the company is planning to release a Sport model. What is interesting here is that you can swap the Swim chassis with the Sport frame, without replacing the underside hull.

This means you can buy the Swim model and replace its chassis later with a Sport framework, giving you limitless possibilities, thanks to the wonders of 3D printing. Local Motors believes in “form over function,” so it wants its cars to look different while using the same platform—a body made of 80 percent ABS plastic and 20 percent carbon fiber materials. For now, around 75 percent of the LM3D will be 3D-printed, however, the goal is to print 90 percent of the car, the company said.

Companies Racing To The Printing Line

Local Motors also collaborated with IBM to integrate IoT technology using its IBM Watson, a supercomputer, into the 3D-printed car. The company also tapped Siemens for its Solid Edge CAD modeling, IDEO to renew the Local Motors Labs, and SABIC to improve the quality of the materials used. The company expects to complete all necessary certifications by the end of 2016 and exceed Federal Motor Vehicle Safety Standards by 2017.

Unlike traditional cars, which could take years to design and manufacture, the LM3D 3D-printed car takes only two months to complete, from design to prototype, Local Motors claims. Moreover, with companies like Google, Tesla, General Motors, Apple and most recently, Toyota are racing to get their respective electric and autonomous cars to the public, Local Motors is in the right direction. The LM3D series will be available for purchase in late 2016 for roughly $53,000.

The expected delivery date will be sometime in 2017…

Gene is a writer with over five years of experience in covering the technology industry. Gene writes about computers, gadgets, mobile devices, software applications, AI and startups…