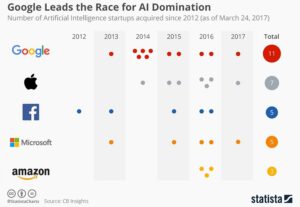 Google, directly or through affiliates, is becoming the dominant investor into artificial intelligence (AI) startups. Their latest programme for such startups, Developers Launchpad Studio, launched this week, appeals to all AI startups worldwide. Alongside mainstream AI, Developers Launchpad Studio is also set to back companies working on innovative machine learning.

In addition, Google offers venture capital investment, perhaps most notably including $50,000 grants which do not involve acquiring any equity. Other rewards include product credits for services like Google Cloud. In that sense, Google is rolling out the carpet to AI startups in the hope of getting them to opt for its services instead of rival ones.

Unlike other similar programmes, Google is casting its AI net very broadly. Thus, both early stage startups and post-series B companies can apply for Developers Launchpad Studio backing. The only requirement for applicants is that they should be working on AI or Machine Learning.

Part of the logic behind the Developers Launchpad Studio launch appears to be to identify AI startups into which Google’s newly launched Gradient Ventures venture capital fund would invest. Gradient Ventures plans to support 10 to 15 startups in 2017, backing each with between $1 million and $8 million.

Google: investing into people, rather than companies?

In the five years to the end of March 2017 Google acquired 11 artificial intelligence startups, finds a CB Insights report. This is nearly two thirds more than Apple’s seven acquisitions, over twice Facebook’s and Microsoft’s five each, and nearly four times more than Amazon’s three. 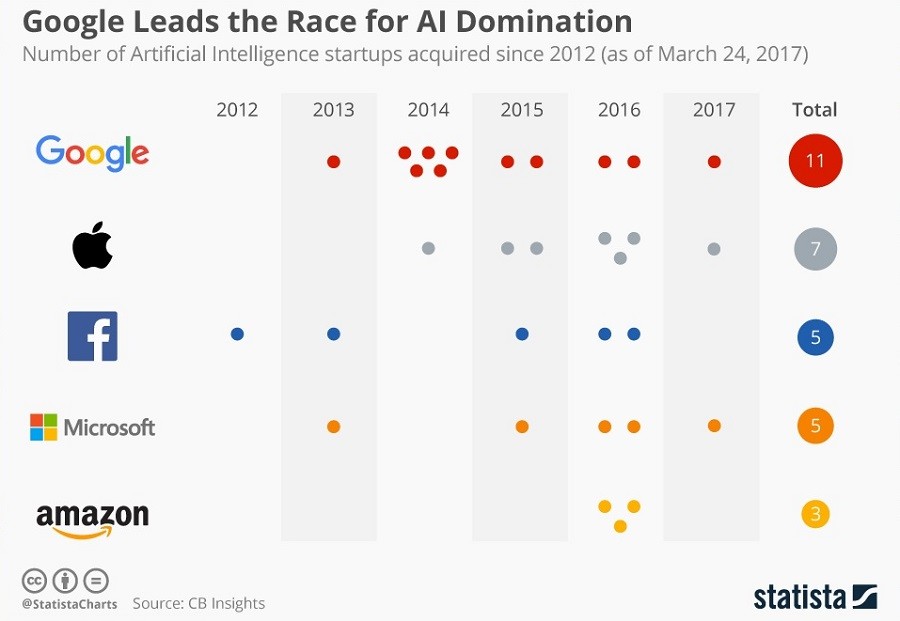 VC investment into AI tripled from $3.2 billion in 2014 to $9.5 billion in the first quarter of 2017 at an annual rate. Google led both VC investment and incentives for promising companies.

Summarising who has invested into what during funding rounds is easy; determining the number of AI startups who prefer Google backing is rather harder. Competition between cloud platforms is fierce. Google stimulates innovative companies to use its services, making their overall investment into innovative tech hard to estimate.

As to the ultimate thrust of Google’s investment, research papers by PitchBook appear to indicate that most of the acquisitions covered above aim to get talented researchers on board, rather than to acquire profitable businesses.

This should not be surprising. AI remains an emerging technology whose new criteria make spotting talent very hard. Most AI startups have between two and twenty individuals whose average “price tag” is $2.5 million. Any startup developing cutting edge technology, be it AI, machine learning, or cognitive computing, simply cannot afford to have more than one or two brilliant minds on the team.

The above would indicate that companies like Google are really investing into the people who are developing AI, rather than into the more traditional business trading attributes. If this were so, it would be both good news and bad.

The good news is that there is no shortage of talented researchers developing innovative technologies. The bad news is that most of them will end up at large multinationals, which traditionally lag in adopting new technology. Certainly, many AI researchers go into business hoping for a successful exit that would make them rich overnight. Others, however, hope to build sustainable long-term businesses that would remain independent.

While indications are that Google is really investing into individuals rather than businesses, the main thrust of its AI startup investment policy remains a matter of conjecture. It is just as likely that they are investing into both people and companies, or else that they are simply diversifying their AI investment portfolio. Whatever the future might reveal, at this stage we can be certain of one thing: Google is the leader in AI investment.